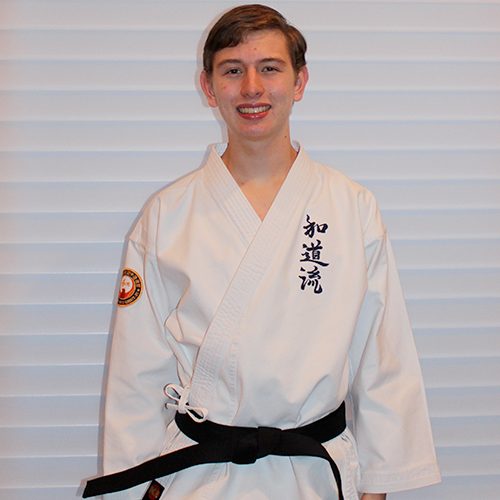 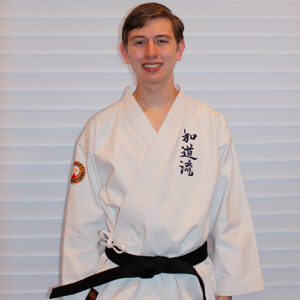 The rank of Shodan is something I have been looking forward to achieving for ten years.  Now that I have achieved it, I am assured that my efforts have finally paid off.

My journey began when my parents signed me up for Wado Ryu Karate at age 6 at the Huntington Beach dojo.  As I worked my way through the ranks, I continued to become more proficient in my techniques as well as more interested in learning the next kata.

When I was 11, I moved to Indiana for my father’s business.  Finding a dojo there was extremely difficult, but finally we found one of the only Wado Ryu teachers in the state who was willing to give me, my brother, and my dad private lessons.  Although it was essentially the same style as what I was used to in California, there were many new forms I had to learn, and many differences in executing various techniques.  There appeared to be an emphasis on physical strength, strong stances, and a combination of evasion and karate techniques.  My rank advancement lagged due to differences in the kyu system between Indiana and California.  However, I gained a new perspective on karate that would eventually help me through to black belt.

I returned to California two years later, as a high school student and a 1st degree brown belt.  Relearning the old techniques was a challenge, but within a few months, I was back to the status quo.  I found many of my classmates had surpassed me while I was in Indiana, but that did not deter me from continuing on to higher ranks.  As an older member of the dojo, I was able to take leadership responsibilities, helping lead classes, refereeing sparring matches, and helping teach younger practitioners their forms.

My key decision to go for black belt occurred this past summer.  I knew that I would have to put forward my greatest effort in order to reach black belt, and that my level of skill at the time would not suffice.  I started attending sessions at the Main Dojo on Wednesdays and weekends in addition to my usual Thursday and Friday sessions at Huntington Beach.  I thought that by attending Main Dojo classes, I could gain more focused practice on sparring and certain self-defense techniques.

As the school year started, it became more difficult to balance karate against school.  I was enrolled in my school’s International Bacclaureate program, and was taking four advanced placement classes.  The one-hour drives from my house in Huntington Beach to the Main Dojo in Laguna Niguel would often take a big part of my day.  I dealt with this lack of time by doing my homework in the car on the way to practice, and trying to get the most out of each practice.

Now that I have finally achieved my black belt, I feel relieved that such a distinction has come out of my years of training.  However, during the few weeks leading up the black belt test, as well as during the black belt test itself, I realized that the achievement of the rank of Shodan is nothing but my declaration to pursue karate as a serious student.  I hope to continue to improve myself as a practitioner of karate both physically and morally.