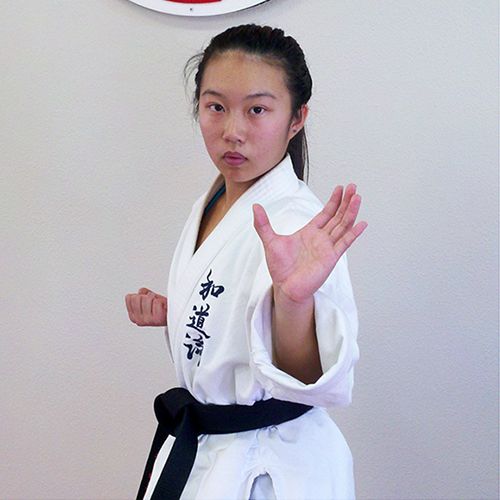 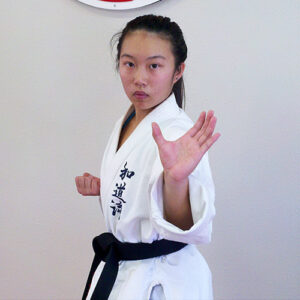 My name is Jessica Chin and I am 14 years old and attend Laguna Hills High School. Last December, I was fortunate enough to earn my black belt after 8 years of training. The story of how I got my black belt started one day when my mom came up to me and told me that she was taking my brother, Richard, and I to a dojo to start karate. I was shocked. Being a shy little girl, I was afraid of doing something as outgoing and aggressive as karate. Even after starting, it took me quite a while to come out of my shell and begin to make progress because I was afraid that I wasn’t good enough. As the newcomer, I was surrounded by people who were older and better than I was; people who could hit harder and more accurately than a six year old could ever hope to. Eventually, I came to the realization that if I wanted to be like them, I needed to train like them.  With this thought in mind, I began taking karate more seriously.

Since starting karate, I have found that there have been several perks to training. For one, I am becoming a more well rounded person overall. I feel that dedication plays a large part in helping people achieve their goals and it shows through their good choices and actions. In addition, because of karate, I have been able to surround myself with good influences, and I have benefited because of them. Aside from gaining friends, karate has also taught me many things other sports could not have. For instance, I have discipline others may not possess and I am aware of my physical abilities because of our training. These things have helped me, not just in karate, but also in real life situations as well.

Originally, I never viewed karate as anything more than an activity to vent the excess energy in little kids. These past eight years have changed my perception for the better. As my brother and I have kept training, karate has taught me many things, including patience, humility and self-control. Because of these factors, I have grown significantly—mentally mostly, as my height has remained the same for a few years now—but more importantly, I have made friends who have influenced me as much as any amount of physical and mental training would have on my body and mind.  I am thankful for the support of many people, most prominently my family and Sensei, without whom I would not have received my black belt in the first place.