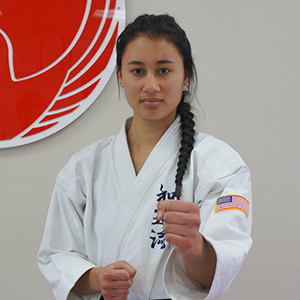 At the age of seven, I was a shy, timid, and weak child.  I hardly talked to new people and I rarely wanted to try new things.  I always wanted to stay in my comfort zone, because if I tried something new I was afraid that I wasn’t going to be good at it. It was also at the age of seven that I started karate; that is when everything changed.

I was forced to try out karate, but after my first practice I decided to continue it.  Going to karate classes was difficult for me both physically and mentally.  I always compared myself to the older kids and I was constantly discouraged.  I didn’t understand why Sensei would be so hard on me with every move I made, especially in sparring.  I now understand that he was only doing this to push me to do my absolute best.  Over the years, I began to develop stamina, strength, flexibility, and perseverance.  At every practice, I pushed myself to increase my skill and physical abilities.  All of this eventually lead to achievements such as earning my Shodan black belt, a third place in the sparring division at the Japan National karate tournament, and finally my Nidan Black Belt.

These accomplishments as well as the many medals (39 to be exact) that I have won in other tournaments have made me proud of my efforts and hard work, but I am more satisfied with how karate has shaped me as the individual that I am today.  I have learned to have respect, discipline, and determination.  Additionally, I am now more outgoing and friendly with new people.  I work hard in other activities such as drawing, keeping good grades, and competing in Track and Field at school.  Karate has contributed to many of my accomplishments in life, but this is mainly due to the help and guidance I received from Sensei Nishimura and all the other amazing students I train with.

Now that I am a Nidan black belt it amazes me to see how far I’ve come.  I realize that there isn’t anything that can stop me from reaching my goals except myself.  I hope to increase my skill in karate in the years to come, because even though I have accomplished so much in the past 10 years, there is still so much for me to learn and achieve.  From the way I see it, karate is a lifelong journey towards perfection.